New York is a city that I consider worth visiting. The truth is that it’s a bit out of the type of tourism I like to do, as I’m looking for something quieter. But this city has a lot of history, a lot of cultures, and many things worth visiting.

When we think of New York, I dare say that 80% of people unconsciously think of Manhattan and think that this is all of New York. Well no, Manhattan is just one of the 5 boroughs that make up New York City, which is also a state with New York City as its capital. Even the state of New York is bordered by Canada.

New York City is perhaps one of the most famous cities in the world and it has a lot to be famous for. The architecture of the city is quite special. I admire the New York City Subway which has been in operation since 1885.  I was quite shocked in my early days once when I was riding the underground and there was a train going parallel to my train and in the same direction. Suddenly, that train disappeared as if it had been swallowed up by the earth. Then I realised that the system has almost 3 floors of underground lines in some parts of the city, which makes it all the more impressive. It seems as if the city has two lives; one that lives above sea level flooded with huge buildings that don’t let you see the sun and another underground where the sun doesn’t exist but everyone runs as if they want to look for it.

I had never been outside Colombia and New York was to be the first city I would see. Leaving a third world country and arriving in a country like the United States, I was already aware that the changes in terms of urban planning could be abysmal. I was already living in New Jersey and visiting a couple of its small towns, but I was preparing to see New York this time. We took the train (Path in New Jersey) and arrived at the World Trade Center station, where the Twin Towers were and is very busy. Being inside the station I might even have felt like being in Medellin, my hometown, nothing strange until that moment. But when I came out of that station I must admit that I was a child again. Everything was different for me. The scale of the buildings compared to what I was used to seeing changed immediately. The buildings were gigantic, you see people dressed in every kind of clothes you can imagine, you hear a thousand languages in the streets, the taxis were those yellow ones you always see in the movies. In other words, I felt a thousand things that made my stay in that country that I had not wanted to visit during my adolescence. My camera acted like the hands of a child who is just getting a new toy and I didn’t stop taking pictures of anything that caught my attention (almost everything).

1.  Statue of Liberty and Ellis Island

Because of its history and what it means to the United States, I think it is a place to visit. I think Ellis Island in particular is worth a visit. They have a museum there and they show you what thousands of immigrants had to live through at the beginning of the 19th century when many families fled Europe to look for a better economic situation in the USA. There are still objects that were used at the time. 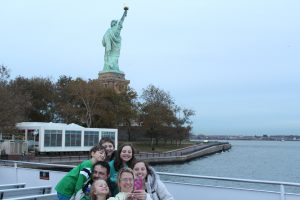 2.  Walk across the famous Brooklyn Bridge

This bridge connects the borough of Manhattan with the borough of Brooklyn. It is quite famous because of its design and the view you can have of the south of Manhattan. The bridge dates back to 1883. We decided to take the Subway to Brooklyn and walk back. The sun was quite strong. 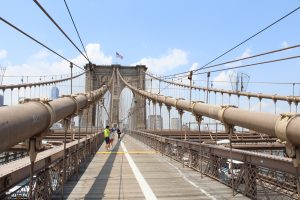 3.  Going to a New York Yankees game at Yankee Stadium

I am a baseball fan and I couldn’t pass up this opportunity I had a great time. If you are a baseball fan make sure you go early so you can get into the Yankees Bullpen where they have some exhibits and also inside they have a museum that doesn’t require so much time to visit. 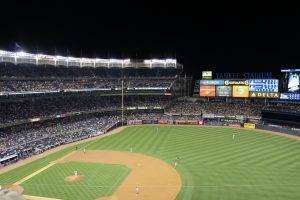 4.  Visit The Metropolitan Museum of Art

This museum is spectacular. It consists of many rooms with works ranging from Egyptian relics to contemporary art. You can spend almost a whole day here and make the most of the rooms that interest you most. 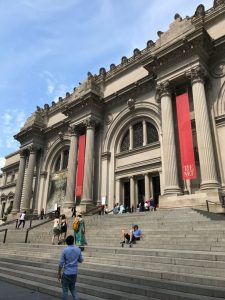 For me, this is the best train station in the city and perhaps in the country. It is an architectural jewel. Inside you can see very good designs and in general, it is a must-visit station. The most famous place is the place where the clock is located in a huge waiting room. 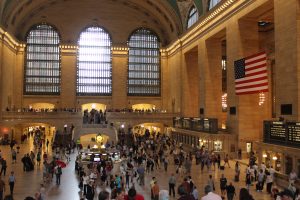 6.  Visit Bryan Park and the New York Public Library (both on the same block).

In the park, they usually do a lot of events during the summer and during the winter they usually set up an ice rink for skating. The library is spectacular and well worth a visit. Its architecture is impressive and very beautiful. I don’t think I have ever seen such a beautiful library in my life. 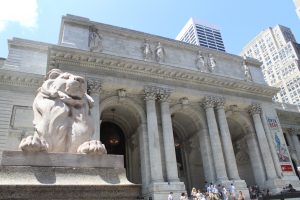 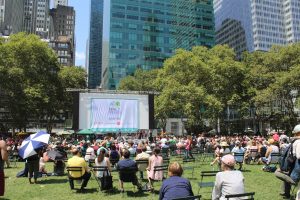 7.  Getting lost in Central Park

This park is the lung of so much pollution that New York has. There you will find the quiet side that you won’t see in the busy streets. People come to this park to de-stress and therefore you will find millions of activities to do there. The park is huge and it’s best to visit it without rushing. There is a small zoo which you can visit for free. 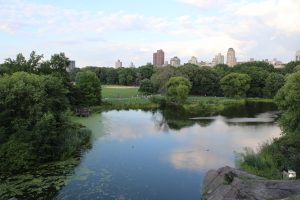 This is without a doubt the most illuminated street in Manhattan and I even thought I would have to wear sunglasses to go in there. Its blocks are SATURATED with lighting and you will see advertisements for many major brands displayed on huge screens. This is the place where thousands of people congregate to bid farewell to the old year in New York. 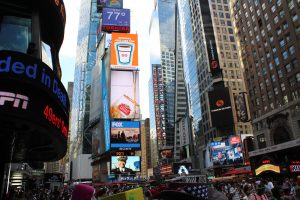 This is a very large building that many people go up instead of the Empire State Building. It is cheaper and many say it is even better to see. If you go to New York during Christmas be sure to visit Rockefeller Center. In the plaza of this building they usually put a giant Christmas tree decorated with lights. It is quite beautiful. They also have an ice rink for people who want to skate. 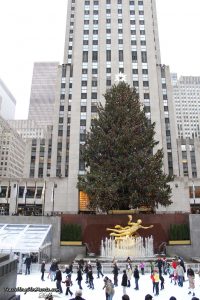 These shows are true works of art and it is worth being there. I was not planning to attend one of them, although I liked the idea, my pocket was not enough. However, they gave me a ticket and well, why not. The show is spectacular as they are loaded with lots of lights, a live symphony orchestra and very good actors. It is said that these shows are the beginning of many famous actors. 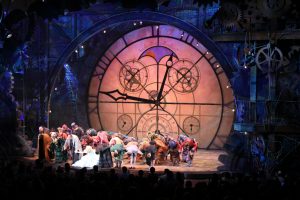 This was the first place I visited in New York and I could feel a lot of things. I was standing in the place where thousands of people once died on 11 September 2011 due to the terrorist attacks on the twin towers. Two huge pools were made there to remember them. The water from these pools goes down and in theory, does not return. That was my interpretation and that is what made this memorial a bit strong for me. The Freedom Tower (One World Trade Center) looks quite imposing over the skies of New York and can be seen from many parts of the city. I didn’t visit the museum because it was expensive to get in and it didn’t hold my attention either. 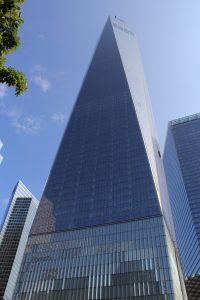 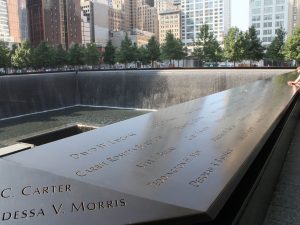 The climb up the second largest building in New York was quite interesting. It is a bit expensive but worth it. The view from the 86th floor will leave you speechless and you will get to size up this monster of a city. You can also go up to the 102nd floor (more expensive) but I think it doesn’t vary much. I was happy with the view from where I was. 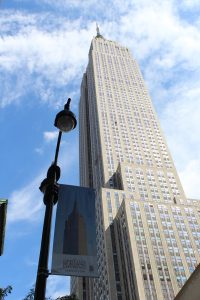 If you visit New York between August and September be sure to attend this event. 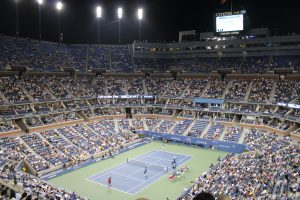 These are two neighbourhoods in Downtown Manhattan with a lot to offer. They have a lot of food and bars typical of their regions, and many of their restaurants are very good. In China Town, there is a very large community of Asians living there. You can practically imagine another country inside that city. Once you enter that neighbourhood you start to see signs in a different language, and different restaurants and your landscape changes immediately. They even have banks inside that neighbourhood and Asian newspapers that they sell on the streets. 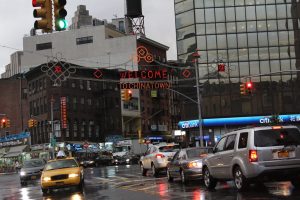 I liked this park a lot. It is a park with a lot of life and generally, you will find (during the summer mostly) a lot of people doing various activities such as skateboarding, dancing, singing, integrations etc. 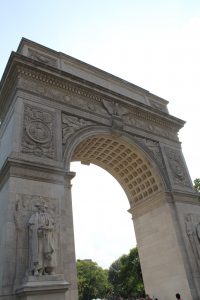 A spectacular cathedral you’ll want to see for sure 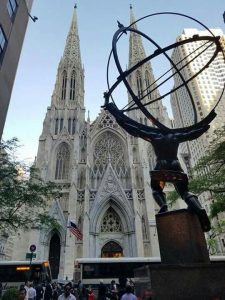 17.  Visit other boroughs such as Queens and Brooklyn.

You can also get a different impression of New York if you visit other boroughs as well. So try to take the Subway and head to either of these two other important places in New York City. 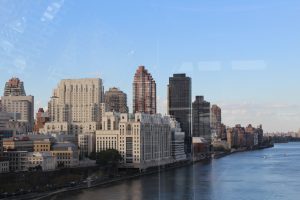 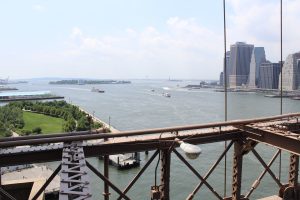 This Pizzeria is quite famous in Manhattan and quite delicious. 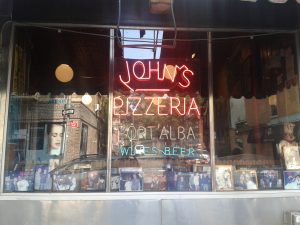 New York is now the home of the Brooklyn Nets. So if you have time you can go to the Barclays Center in Brooklyn to watch a basketball game. Tickets are very expensive but there is one technique I recommend. Arrive at least 10 minutes late and you will find many scalpers eager to finish selling the tickets they have. That’s why they will give you the tickets at a very affordable price. 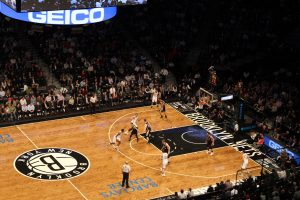 This is a small island located in the East River between Manhattan and Queens. On this island there is a cable car that you can take that will take you to Manhattan. It is also a perfect place to relax as there are several parks. If you like this sport or you are just curious like me, you can take advantage and go to one of these games. In New York, you have 3 options: NY Rangers, NY New York Islanders and NJ New Jersey Devils. Tickets are a bit expensive but you can also arrive late and wait for the desperate scalpers to give you an incredible rate. 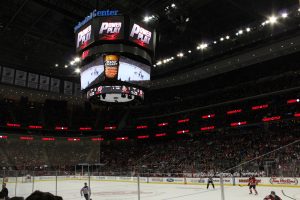 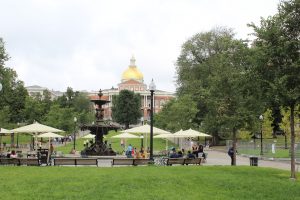 25.  National Museum of the American Indian

This museum is free and has a lot of history of some of the Indian Tribes that inhabited the United States. 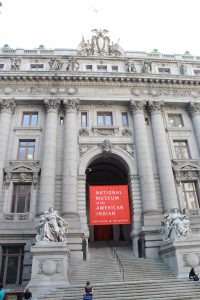 National Museum of The American India

If you are in lower Manhattan you might want to take a walk around one of the icons that symbolise the financial industry on Wall Street. It is a 3-ton bronze bull that has been famous but became even more famous after the movie The Wolf of Wall Street with Leonardo DiCaprio. Bowling Green St. 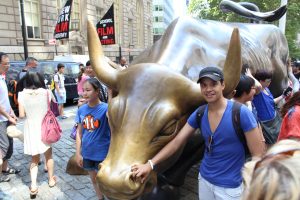 During the winter many places get ready to welcome snowboarders. There are a lot of places where you can do it especially in New Jersey and in the northern part of New York. If you are a beginner like me, you probably don’t need a big place to practise this sport. So, if you want to go snowboarding I recommend that you start in December by looking for Groupons on Groupon.com. This is a site with very good prices for many activities.