My first month in Berlin

My first month in Berlin

I have to say that I’ve had a pretty good time so far. I like being in different places and that’s how I can make the most of it. So far, Berlin has been very fulfilling for me. The city is very international and I have met people from countries I didn’t even know existed (I won’t mention them so as not to be too ignorant).  I liked the city, although many people think the opposite, even some locals.

I will start by describing briefly the aspects that are surrounding my daily life:

Berlin was the first city that welcomed me to the old continent. I had never been to Europe before and that makes my stay in this city a bit more interesting. Practically everything is new to me. Starting with the language. I feel as if I have been teleported to another world (exaggerating a bit), but the signs, the streets, the cars, the buses, the architecture, the climate etc. I have visited some beautiful places. I have visited some beautiful places that when I was little I only thought I could see in my 8th-grade social studies books. European architecture can be seen a lot in this city. Places like the Brandenburg Gate, the Berlin Cathedral, the Chalotengurg Palace and many museums etc.

Most of the buildings and houses have a similar shape all over the city. It is unusual to see buildings of more than 6 floors and the larger buildings are mostly business buildings. Due to the wars that have been fought in this city much of the architecture has been lost and to this day after more than 50 years, you can still see renovation work going on in some parts. Its streets are full of history and many things to tell. Many museums tell the story of everything that has happened in the history of this city.

The city has many parks in the city where you can do many activities.

The Charlottenburg Palace was one of the places I liked the most. It used to be a summer house or what we call a country estate in Colombia of some kings in 1704. It is really impressive. Here are a couple of spectacular pictures.

Alexanderplatz is one of the city centres. Here I share with you a couple of pictures of this icon for Berliners.

Where I am studying is very big and a bit nice. It has two campuses but I have all my classes on one of them. Although the master’s degree I’m doing is taught in a building that is a bit “exotic” with some things that I’ll show you later. In fact, for about a month they have been filming a Hitler movie in that building. The first time I got to see the swastika on a huge flag stuck on the university and several people wearing the costumes of those times. But we had previously been informed of these things by mail so that we would not be alarmed. When I first walked into the cafeteria, what they call MENSA here, I felt like I was in a school in the movies. You take a tray and go through a buffet, get your food, pay and go sit at one of the more than 100 tables. But the method of payment is quite interesting. First of all, every student at the university has a student card with a code, mine, for example, is s5555XXX, that card is used for 3 things: to ride the Berlin train for free, to get discounts in different places and to pay in the restaurant. The same card works like a debit card to which you put money and spend it on food. When it comes to choosing the food is when it gets more interesting. Because I don’t speak German (many of my friends don’t either) I was forced to guess what the food is and the people at the buffet speak almost no English. However, I was able to defend myself. Most adults do not speak English well.

You can get all over the city by public transport. They have two train systems. One is called the S-Ban (newer) and the other is the U-Ban (generally underground and older) and between the two trains, they reach the most remote corners of the city. There is also a tram system. These comfortable carriages are very common to see in many parts of the city and exceptionally complete the public transport coverage. And as if that wasn’t enough, they also have very comfortable and modern buses. Many of them are double-deckers. The special thing about this is that you buy your ticket yourself from a ticket machine. When you arrive at the metro station, you go directly to the train. There is nobody in the station except for the other passengers. There are no policemen, there are no ticket booths (in most stations), and nobody charges you for the ticket you can get on the metro without paying. However, on several occasions a man will come on the metro to check if you have a ticket, otherwise, you will have to pay 60 Euros. The same thing happens on the tram. When you get on the tram nobody charges you, but they also check constantly. In my month I can say that I have ridden both trams more than 100 times and I have only been asked for my ticket twice. On the bus it’s even funnier, the buses have fixed stops and they don’t stop where you want them to stop but where they say. You have to show the ticket to the driver. But when you show it to the driver they don’t even check if the ticket is valid or not. You can show them any ID card and they don’t care (usually). I had a friend who was riding a bus for the first time and he went to show his ticket to the driver very carefully and the driver told him to move, more people were getting on.

The rules inside the train are very flexible. You can eat, drink, carry whatever you want. We bought a small cooler and carried it on the metro without any problem.

is not so bad. In Germany meat is very famous and among them WURST, which means sausage. You can find many types of wurst, the most famous one is called currywurst, but you can also find bratwurst, weisswurst and so on. However, because it is a very international city there is a lot of variety of restaurants for all tastes. So far I have been able to visit an Indian restaurant and an Egyptian restaurant with friends from university. When it comes to shopping there is not much difference compared to Colombia. The prices of some things are a bit high but it is not very noticeable. Fruits are very expensive as most of them are imported.

All in all, it was very good. Berlin is a very international city and therefore has people from many countries with many different ways of acting. The Germans in particular have not been as bad as I expected. The older people are a bit rougher. I have already had the case with two ladies who almost killed me with their eyes. I also had a very curious case in a very busy place in this city called Alexander Platz. I wanted to take a photo and I asked 2 young men (17 years old approximately) if they could take my photo and they said no. Nothing to worry about, we took the photo. Nothing to worry about, we took a better selfie!

Yes, they are very strict. This is a very orderly city and country (that’s my impression so far). The worst rule of all and the one that has hurt me the most is the internet restrictions. Here you can’t download absolutely anything from the internet. Programs like Ares or some Torrent are forbidden. Although I’ve heard of people paying to have a different IP and they can do it. If you download something illegal you have to pay a fine which is usually USD 500 or more, depending on what you download. Something very similar happens with music on Youtube, only without a fine. There are many, many restrictions on videos. In Colombia, I could watch any video I wanted. Here it’s different, I have to watch covers because the original videos are prohibited by copyright. If you get caught on the train without paying you have to pay a fine of 60 euros. If you are going to stay living in this city you have to go to an office to register your residence address. And every time you move house you have to do the same. Time is extremely respectable. 10:00 am is 10:00 am. You have to be very punctual. People usually don’t cross the street when the pedestrian light is red. There are several areas where they don’t respect it but in most places, if you try to avoid the light they will look at you a little bit bad.

There was an event called Lights Festival and they were lighting up some of the main buildings in the city with different images. The Berlin Cathedral, the Brandenburg Gate and the Humboldt University were among the protagonists.

This church was badly affected by the bombing in 1943 and today it is partly held as a memorial. 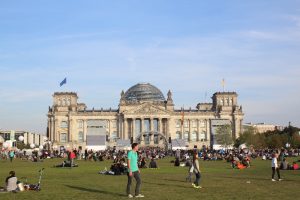 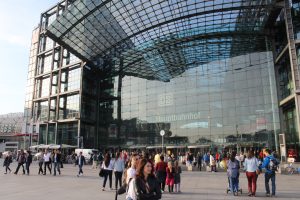 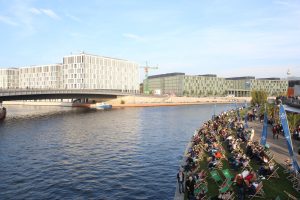 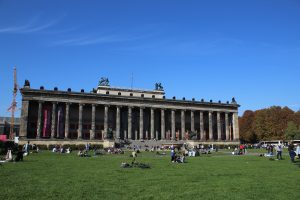 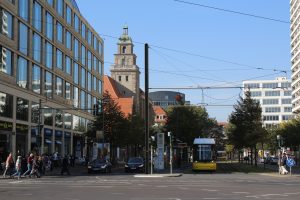 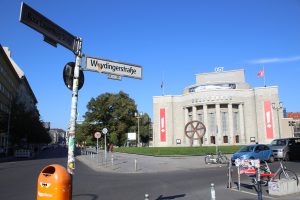 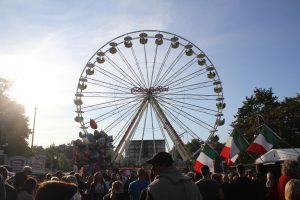 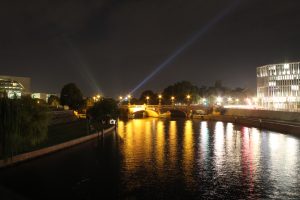 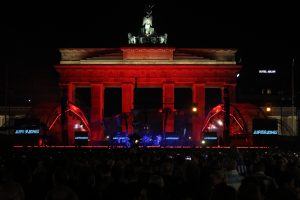