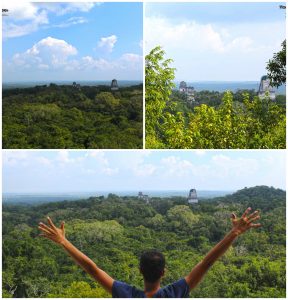 We arrived to Flores, Guatemala after a long day of travel from Palenque, Mexico. Flores is a  small island located on Lake Peten Itza and connected by bridge to the town of Santa Elena. Since there are limited options for staying at Tikal, most tourists choose to stay in Flores and make the trip by shuttle bus from there.

There’s not much in Flores except for restaurants, hotels, and travel agencies, and the entire island can be traversed in about 10 minutes. The cobblestone streets, however, are charming and we were afforded a beautiful views of the lake from the rooftop terrace of our hostel. 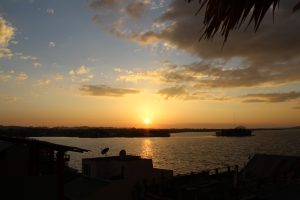 No direct buses go from Flores or Santa Elena to Tikal (and you’ll end up paying the same or more changing buses several times), so you’re better off booking a shuttle with a tourist agency the day before you plan to go. We booked through the agency right next door to Casa Aurora for round-trip transportation leaving at 8am for 60Q ($8US) each, bargaining down from 80Q. The entrance to the park costs another 150Q ($20US), making it the most expensive ruins we’ve visiting so far, but definitely worth it!

It’s thought that Tikal was inhabited between the years 600 BC and 900 AD when it was abandoned. The archeological site is surrounded by thick jungle that spreads all the way up to Mexico to the West and North and to Belize in the East. In fact, only about 20 percent of Tikal has been fully excavated while the rest sits buried in the jungle. As we walked from one temple to another we saw many oddly shaped “hills” where temples were still buried underneath. 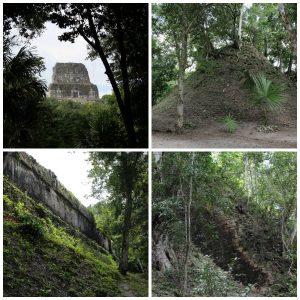 At several points during the day we saw spider monkeys swinging through the trees! 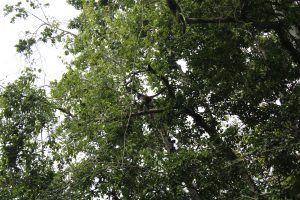 It’s still possible to climb up most of the pyramids in Tikal, and we definitely wore ourselves out with all of the climbing and hiking. By far the most impressive view is from Pyramid IV. It’s possible to do a sunrise tour of Tikal where you’ll watch the sunrise from this pyramid, but beware, you’ll have to pay for a guide as well as an extra 100Q to enter the park before 6am when it officially opens.

One of the most impressive structures and a much-recognized symbol of Guatemala is Pyramid I, also known as the Jaguar Temple. This one can’t be climbed. 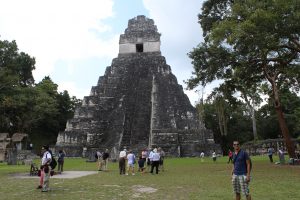 We had already visited four Mayan ruin sites in Mexico before getting to Tikal, but we both agreed that Tikal was our favorite so far. 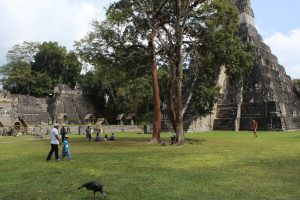 We stayed at Hotel Casa Aurora in Flores for 40Q ($5.25US) each in a dorm of five, and were satisfied but not overly impressed with our stay. The staff are locals and extremely friendly. The rooftop terrace is beautiful and if you’re short on funds they’ll rent you a hammock to sleep in for 15Q ($2US). They do have a small kitchen, although it’s difficult to cook there because of lack of space and pots and pans.

There are options to stay in the jungle in Tikal as well if you don’t mind paying more (we heard $50US for a dorm room) or bringing your own tent ($10US). Since the hotels are inside the park, you’ll have to pay the entrance fee to Tikal in order to get to your hotel. Get there after 3pm and your ticket to Tikal is good for the next day too!