Washington D.C is one of the cities that I have liked the most here in the United States for several reasons. The styles of many of the houses, the buildings, the streets and the architecture that you can see in this city are incredible, the train is very neat and most of the stations are very nice. There is something else that makes you really like this city and that is that all the main places to visit are free, yes sir, free. Museums, memorials, zoo, more museums and many other things make you have a lot of fun in this city and you can learn a bit more about this country. Also, as if that wasn’t enough, all these places are relatively close by. You have to be prepared to walk, because although the places are not so far apart, you have to walk quite a bit, as the distances are a bit deceiving. I didn’t take this into account and went out in flip-flops on the first day. 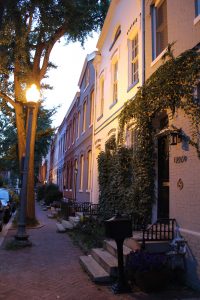 Washington for me started off very special as we went out with my girlfriend’s sister to eat at a restaurant in Ethiopia called Dukem http://dukemrestaurant.com/. The restaurant was a bit fancy and very particular but the most particular of all was that you ate with your hand. There was no cutlery at all and everything was eaten by hand. The food was delicious and I took the opportunity to try a couple of Ethiopian craft beers that were really good. 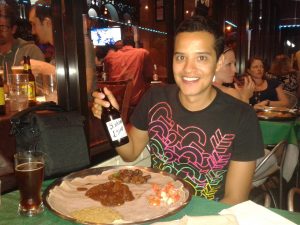 Starting the next day we started with the recommended tour of Washington starting with the White House. A huge house that you can’t get closer to than the fence that surrounds the entire garden. However, you can appreciate the complexity of the property and the security that surrounds it. The surrounding area is perfectly decorated with gardens, statues and you can see many buildings with many sculptures on them. The truth is that when you enter this area you start to enjoy it visually. 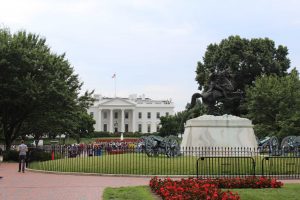 Behind the White House is the Washington Memorial, which is a super-sized obelisk in the middle of a huge garden. 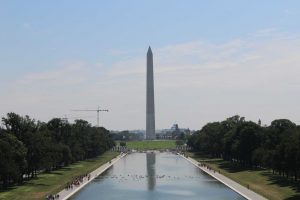 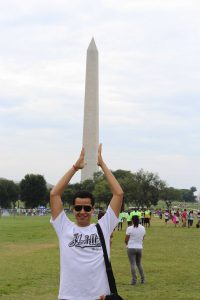 Here we came across a ver funny scene and it was a little girl standing on a fence blowing air. The girl was standing on the fence wanting to create the famous picture of  Marilyn Monroe. It was really funny. 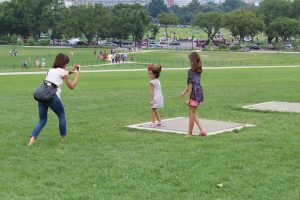 Near the Washington Memorial is one of the most spectacular parts of the area, consisting of the World War II Memorial, the Reflecting Pool and the Lincoln Memorial. First we find the World War II Memorial where all the cities that took part in this war are located accompanied by a lifeboat, there is also a wall with 4,000 golden stars that honour the lives of the almost 400,000 people who lost their lives in that war. Quite symbolic. 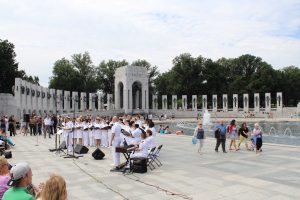 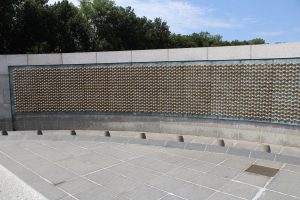 Near the World War II Memorial is the Reflecting Pool and in front of it is the Lincoln Memorial. These two places together are well remembered as this is exactly the place where Martin Luther King Jr. gave his “I have a dream” speech. The view over the reflecting pool is spectacular, seeing the reflection of the sky on the ground and also appreciating the obelisk on the other side. 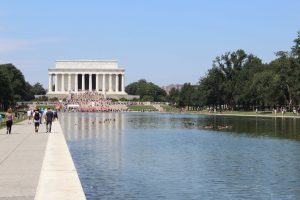 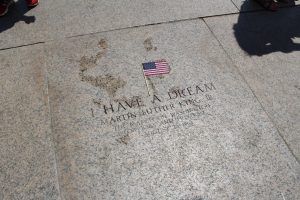 Abraham Lincoln is one of the most emblematic figures of the United States. And he was a complete hero for this country. He was the 16th president of the United States and was the protagonist of the civil war. He fought strongly against the slavery that they had in this country concentrated in the American south, which is why he was assassinated. He is a complete character that means a lot to this country. And you see him everywhere: stations, streets, neighbourhoods and if you don’t know him, you can see him on the 5 US dollar note. This is the memorial created in his name which is really striking. 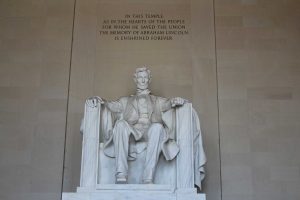 A little further along the road is the korean war memorial  a memorial to all American soldiers who participated in the Korean War in which almost 55,000 died or were declared missing. 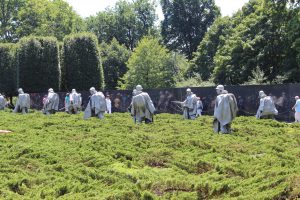 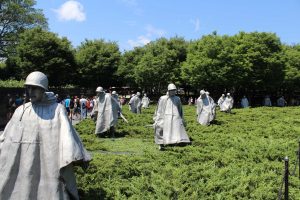 Afterwards we visited one of the saddest memorials for me, or one of the ones that touched me the most. It is the Vietnam Memorial where the names of all the names of the people who died can be found. It may be a very simple place because there is only one wall full of names. But the most heartbreaking part is that you start walking and on the wall you only see 10 names and as you go down you don’t see 10 but 100 and you keep walking down and you find a wall full of thousands of names that died for no reason, a war that had no reason to exist, in fact no war has any reason, but in this one people died for no reason and that makes this place a bit sad. 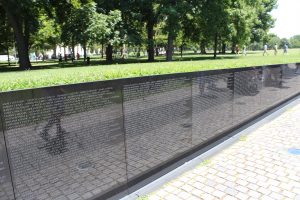 Martin Luther King jr also has its own memorial. A 9 metre high carved rock that stands near the Lincoln Memorial is a majestic work of art and this man really needed to be remembered with something of that magnitude. Martin Luther King was one of the civil rights leaders and one of the black leaders who fought the hardest for equality in the United States, trying to eliminate any kind of rejection between blacks and whites by seeking equality. Unfortunately he was also assassinated in Memphis – Tennessee. 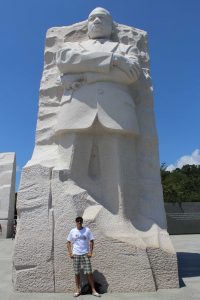 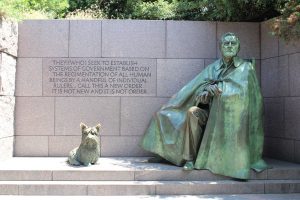 Then we started to visit the museums starting with the museum of national history where you can see many stuffed animals placed in such a dynamic way that they recreate their natural habitat. It is a very interesting museum to visit because there are so many animals in there, plus it is free of charge. 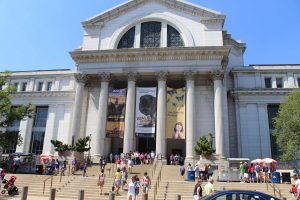 There they also have stored in a room “the hope diamond” which is one of the most expensive jewels in the world. It was donated to the museum in 1958 by a jeweller. 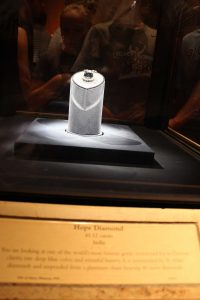 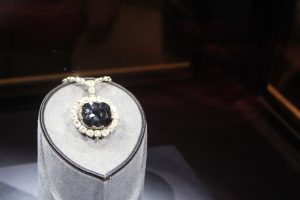 Another very interesting museum to visit was “The air and space museum” where as the name says there is all kinds of aviation history and this country has it all. There are even real models suspended in the air that were developed years ago to fly and one or two replicas. In this place I had a great time as you can spend hours and hours reading about space and aviation. You need a lot more time to be able to fully enjoy the many things this city has to offer. 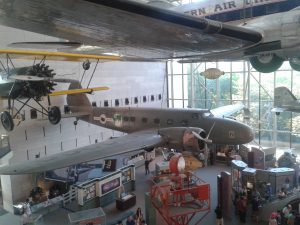 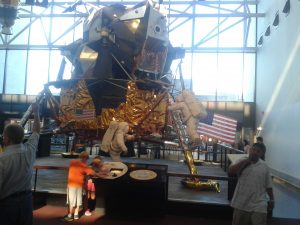 I was also in the “National gallery of art” which is a huge museum with too much art to show and like “The air and space museum” I didn’t have time to visit it completely, it is a very big museum with a lot of art everywhere and it has works that I enjoyed a lot. 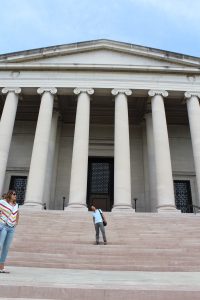 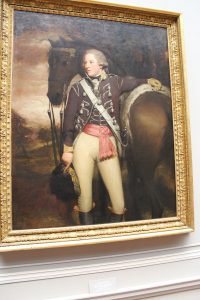 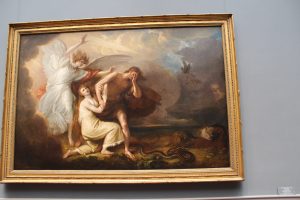 One of the last things we did was to visit The Capitol Hill which is exactly as it appears in films and on television although it feels a bit strange to be looking at one of these well-known places and have it right in front of you. It’s a bit weird. 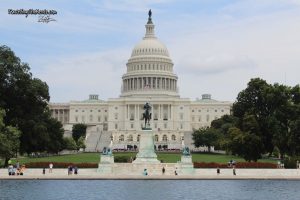 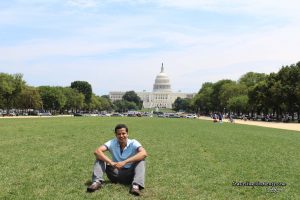 I liked the train in this city very much, the stations have a very nice style which made a big impact on me as I had just seen the train in New York whose stations are not very nice to say the least. 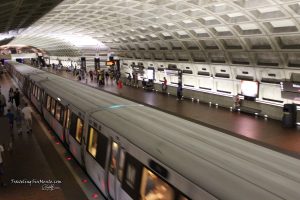 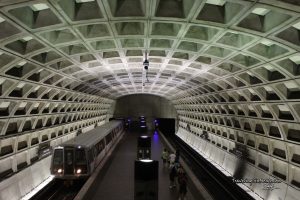 And last but not least the zoo, although this one went a bit badly. It was one of the last things I did and I couldn’t see almost any animals, they were all asleep and a few of them were out, but the zoo was still free so I also had fun walking around the whole place. Something very particular that happened to us when we arrived at the Zoo station were the escalators, they were huge, the first thing I thought of was the song “Stairway to Heaven” by Led Zeppelin because they were huge, I think I had never ridden on a staircase as long as that one. 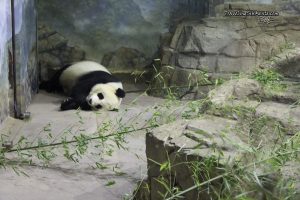 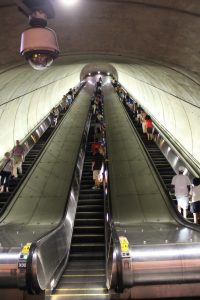 The truth is that I really liked this city and if you have the opportunity to come here, don’t hesitate for a moment.